After the screening, we will have among us Boris Lojkine (Director of Camille) & Philippe Massonnet (Agence France-Presse Asia Pacific Regional Director) to give a sharing of the topic of war journalist, from the perspectives of a filmmaker and journalist. 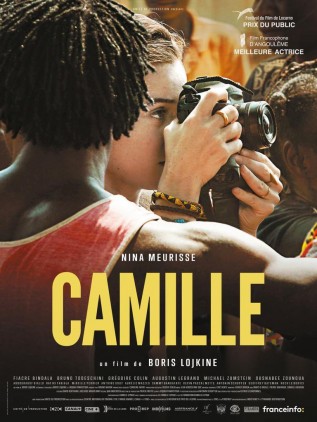 This is the true and dramatic story of Camille, a young idealistic photojournalist, who goes to the Central African Republic to cover the civil war that is brewing up. She gets there to live her two passions: photography and Africa. However, she slowly loses control of the situation and cannot see the danger grow for herself. The tension rises until concluding the fate of the young journalist.

Camille Lepage, a  French photojournalist who set up her backpack in South Sudan (a new state created in 2011) in July 2012, to cover these abandoned and conflicted areas and to bring back new images of these ignored areas, and have them published in major international newspapers. At a very young age 26, this passionate photojournalist has already brought piles of stunning pictures to the world. Unfortunately, she died when reporting the working conditions of children in a diamond mines in CAR.

Boris Lojkine, director
After shooting two documentary films in Vietnam about the memory of the war (Ceux qui restent in 2001 and Ames Errantes in 2005), Boris Lojkine changes continent to immerse himself in the Africa of migrants and directed Hope, his first fiction, with non-professional actors met in Morocco among migrant communities. Hope was shown and awarded at the 2014 Cannes Critics Week and many other international festivals. Boris Lojkine then directed Camille, his second fiction movie in the Central African Republic. The film won the Piazza Grande Audience Award in Locarno in 2019.

Philippe Massonnet
Philippe Massonnet has been Agence France-Presse Asia Pacific Regional Director since 2015, based in Hong Kong. He was Global News Director of AFP from 2009-2014. Graduated from Strasbourg Journalism School and the National Institute of Oriental Languages in France, he is a specialist of China where he started his career as a freelance journalist mid-80’s before joining Agence France-Presse. As a young reporter for AFP he covered the conflicts in Rwanda and Zaïre.